I originally wrote the following for BCC back on January 18, 2010.

Martin Luther King Jr. is one of my very favorite figures in the history of American politics and social thought. I have always had a special respect for the civil rights movement, even during my days as a conservative. But King himself holds a special place in my thinking today. I think this is largely because King represented a form of left- leaning liberalism that died in American politics when he died in Memphis.

In his Letter from Birmingham Jail, he rejects calls to wait rather than act, we see the most eloquent and passionate rejection of Burkean gradualism since Thomas Paine. In American thought, King is very much a mixture of Paine and Thoreau: a advocate of a rights revolution of non-violence. I am not sure if you can beat that.

His “Beyond Vietnam” speech stands as one of the most articulate moral arguments against that war. While we are well aware of the eventual widespread opposition to the Vietnam War, King’s 1967 speech was before the public turned against it. He took a stand against the war before most public officials would do so publicly (almost a year before Walter Conkite’s famed turn against the prudence of the war). The part of the speech which stands out most to me is his assertion that the Vietnamese were people, too. This is a truth that was lost on our war policy of that time, and ours.

When I lived in Idaho, it is not unusual to see a letter to the editor which complained about Martin Luther King Day because King was a communist. The best part of the communist charge is that it is false and a relic of a time when unpopular figure of the left was a communist. He was an egalitarian and a radical one at that. He was a critic of American capitalism. This might make him some form of social democrat or socialist (I proudly claim to be both) but he is anything but a Soviet Marxist. In many way he was a Hugh Nibley with social organization skills.

Of course, you have to keep in mind that these myths are usually spread by John Birch Society-types who consider William F. Buckley and George Will to be communists. Within Mormon culture, this perspective of King and the Civil Rights movement was advocated by Ezra Taft Benson. Mainstream conservativism and the GOP long ago distanced itself from this lunacy. We are stuck with it.

I relate strongly to the world-view when he stated in his “Where Do We Go From Here” in 1967:

What I’m saying to you this morning is that Communism forgets that life is individual. Capitalism forgets that life is social, and the Kingdom of Brotherhood is found neither in the thesis of Communism nor the antithesis of capitalism but in a higher synthesis. It is found in a higher synthesis that combines the truths of both. Now, when I say question the whole society, it means ultimately coming to see that the problem of racism, the problem of economic exploitation, and the problem of war are all tied together. These are the triple evils that are interrelated.

I love King for his willingness to go beyond basic civil and voting rights and to call for a more equal America. It is also why his vision is still a vision for our day, though a very distant vision. We have spent the last 40 years moving away from King’s vision of a more egalitarian society. Am I hopeful that his dream will ever be realized? I am not sure anymore. If anything I am more pessimistic than ever about the prospect of a just America.

Do I believe in the dream? Absolutely. The whole dream. 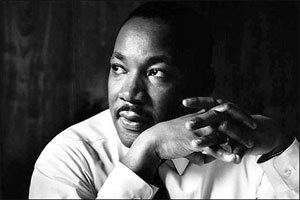