Leonard Arrington is known for producing some of the most important scholarly work on Mormonism during the twentieth-century, and for being the father or grandfather intellectually speaking of almost every historian of Mormonism over the last several decades. The first academic to be given the title “Church Historian” by the Church of Jesus Christ of Latter-day Saints (no one who previously  held the position was a trained historian), he worked in that position from 1972-1982 and was, with many of his colleagues in the history department of the LDS Church, subsequently moved to Brigham Young University to help start the Joseph Fielding Smith Institute for Church History. Arrington’s departure from the historical department of the church and move to BYU came after it went public that there were disagreements and some infighting within the church hierarchy over what kind of history should be allowed to be written, who should be allowed to write it, and what kind of access to the historical manuscripts held by the church should be allowed to not only outsiders but insiders as well. This is all well documented in Arrington’s book Adventures of a Church Historian.

One interesting note that I recently came across in Arrington’s papers, that I have not seen mentioned in his diaries or a recent biography, is the possibility that Arrington was spied on while teaching at Brigham Young University in order to ensure that he wasn’t teaching anything too liberal. This is fascinating in light of the fact that at least a few employees in BYU’s Religious Education department had the same experience as recently as four years ago. If it is true that Arrington was also recorded then this suggests a decades-long tradition of BYU professors being recorded and spied on. That maybe this has happened not just every once in a while when a rogue administrator has feelings similar to Ernest Wilkinson’s, but a continuous attempt since Wilkinson to have near complete control over what is presented in the classroom.

The document itself is only a small piece of scratch paper. In Arrington’s hand the document says: 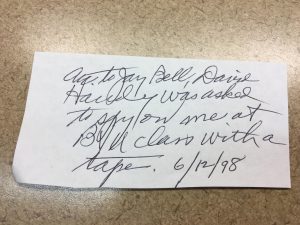 I have a good idea who Jay Bell is, may he rest in peace. I do not know for sure, though, who David Handy might be. If you know who he is would you be able to share either here or send an email to yakovbentov at yahoo dot com? Thank you in advance for your help.