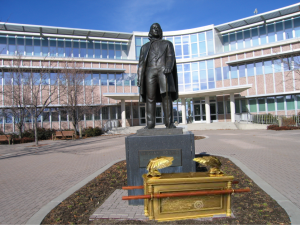 END_OF_DOCUMENT_TOKEN_TO_BE_REPLACED

Cute couple, no?  Find out how to strengthen your marriage as they discuss theirs! 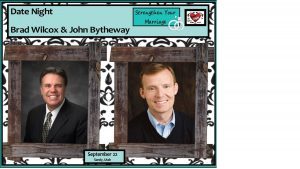 What will those Wacky Dudes in RelEd think of next?

END_OF_DOCUMENT_TOKEN_TO_BE_REPLACED

Over the course of the next week or so we are going to move back to our old domain, faithpromotingrumor.com.

Thanks for your support here at Patheos and we hope to see you at the new site in a few days.

One of the comments added to the last post asked about sources that might help someone get a start on the Bible. So, I thought I’d toss some ideas out here, and my colleagues will probably add things as questions or comments spark them.

The best part of studying the Bible is conversation with other folks who are likewise interested – Christianity is meant to be lived in and thru a community. The fastest way to get started is thru a class with a teacher who can guide you to good sources and respond to questions. If the opportunity presents itself, take a class at a local seminary, community college, public library or whatever.

In any case, the first thing you’ll need is an ecumenical study Bible. That’s a Bible that, at least in theory, doesn’t favor any confessional perspective thru its explanatory footnotes. AND YOU REALLY, REALLY WANT THOSE FOOTNOTES. Why not find one in a library and see what they look like?

END_OF_DOCUMENT_TOKEN_TO_BE_REPLACED

Down below is a YouTube presentation of Revelation 12 done by a couple of BYU professors who style themselves as “Four Guys With Ties.” Before you have a look, however, read this:

In context, Revelation 12 explains the source of the evil and suffering experienced by John’s seven churches. The characterization of the participants, a pregnant woman, a dragon and eventually a baby, is drawn from the world of the ANE combat myth and so resists simplistic decoding.  Its use, however, is fortuitous for John’s purposes because it would be intelligible, even familiar, to both Jewish and Gentile Christians.

The first thing John sees, which he describes as a “great portent,” is a woman.  She is the Cosmic Woman, and as she is pregnant she is many motherly figures from the mythological past: Eve, Isis, Leto and Mary, at least. Most immediately, however, she is Lady Zion, whose travail gave Israel its Messiah (Isa 66:8), and her fragility is itself a fragile illusion because she is crowned, clothed and standing on the greatest glories of God’s creation.

The Cosmic Woman’s opponent is the Dragon. His aggressive power is symbolized by his ten horns and his ability to dislodge significant numbers of stars with a flick of his tail. The seven crowns indicate that he wishes to rule. Mythologically, he is the cunning serpent of Eden and the Python at Delphi, as well as YHWH’S opponents, Rahab and Leviathan. In this context, however, his foremost identity is that of Satan, the great opponent of God from the Second Temple period. He therefore stands before the woman, fully expecting to devour her child when she and the baby are weakest.

END_OF_DOCUMENT_TOKEN_TO_BE_REPLACED

We here at FPR have learned that Mr. Stephen Smoot has been accepted into the MA program at Trinity Western in Biblical Studies. This is a significant first step for Stephen and we are very pleased to offer both our congratulations regarding his acceptance and our best wishes for his future. He has chosen a tough and complicated path but we are confident that he will also find it to be as rewarding as have we.

I might also add, personally, that there still seems to be a bit of confusion arising from a recent post here regarding the intersection of certain approaches to apologetics and acceptance into graduate programs. The point made in the original post was that some activities might make the process more difficult, but what seems to have been understood was that such things are categorically impossible. I regret the confusion and am pleased to have had the opportunity to disambiguate the message.

Again, congrats to Stephen and best wishes for success,

END_OF_DOCUMENT_TOKEN_TO_BE_REPLACED

The Revelation volume in the BYUNTC series is back in the news, so I thought I’d say a bit about it. At last fall’s SBL Grant Underwood gave Richard Draper some advice regarding this volume. Since Draper’s work was not well-received by either LDS or non-LDS scholars, Underwood wrote: “Perhaps by drawing on the talented pool of younger LDS scholars trained in New Testament studies, [Richard Draper] and Michael Rhodes can extend their work in ways that more effectively bring LDS views into tough-minded conversation with biblical scholarship generally.”

This sentence indicates that the Revelation volume has two major problems. It does not adequately handle the existing scholarship on Revelation and it does not effectively bring the LDS tradition into dialogue with this scholarship. Underwood is not alone in his critique; the other three published reviews of the BYUNTC project and the available volumes amply bear out his thoughts.

Although Underwood’s critique is spot-on his remedy is a bit less helpful because it under-specifies the help actually needed. Young scholars do not themselves write major academic commentaries because what produces the seasoned insights that make for a respectable contribution is some good length of interaction in public academic discourse involving the text in question. Many of BYU’s religion faculty in the right age cohort for the needed experience have not participated in this arena and so are not well-prepared to either write commentaries or supervise those who are younger.